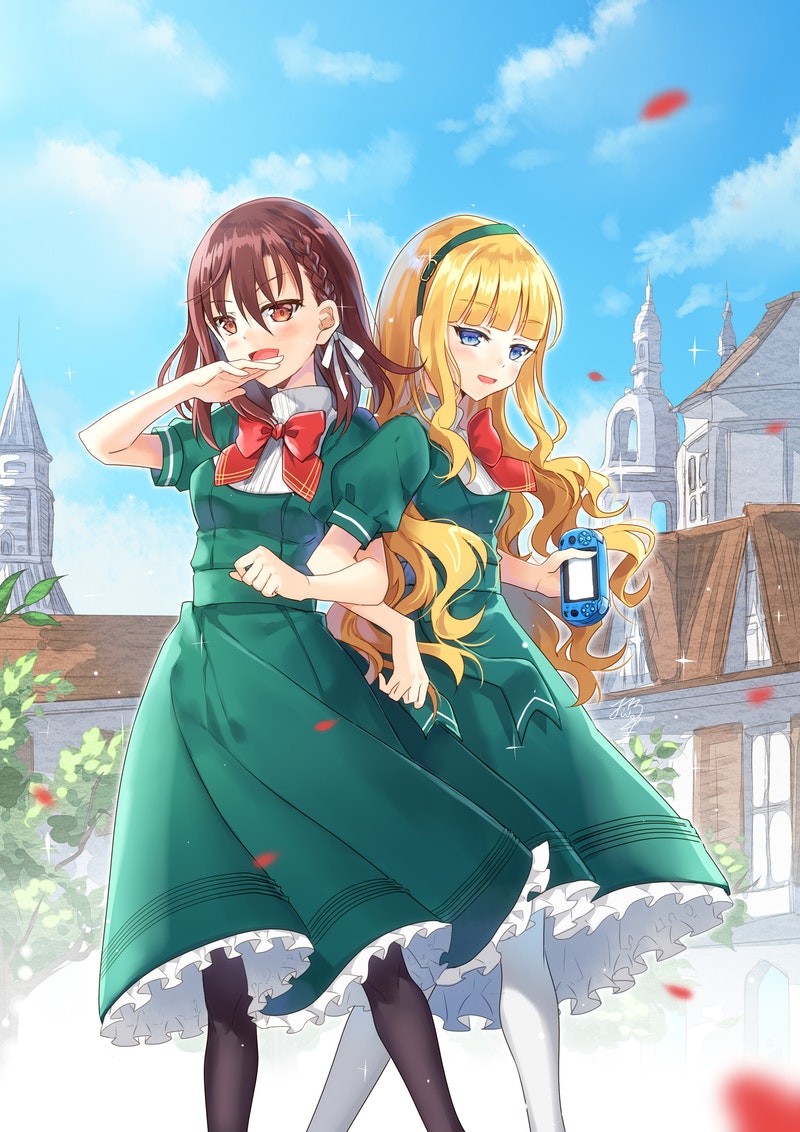 Ⅱ How to crush the right flag

The next morning, the door opened after a knock.

Win showed her face and seemed surprised when I had already changed into my uniform.

He take out his pocket watch and check the time.

“You woke up early.”

But, it’s not too early when considering the trip to school.

“I can’t sleep when the pillow changes.”

I don’t sleep much, but I neither felt sleepy nor fatigued.

Yesterday, I finished my piano lessons, had dinner, bath, and to get ready for the next day, and dived into the bed in Eileen’s room.

Before going to bed, “I might return to the clubroom in University when I woke up”, such thoughts entered my mind, but I knew somewhere in my head that it wasn’t going to be that convenient……

……When I got up, I was not surprised that the bed I was lying on was rather fluffy and not the futon I was familiar with.

“Win-san got up early too.”

Win closes his watch, puts it back in his pocket, and bows again.

Beyond that figure, lies a pile of materials that I scattered last night and recalled some of the information I learned.

“Eileen travels to school every day by car.”

“Yes, at least to save time… I would like to have a tutor, adjust my daily appointments, and work hard at studying. Efficiency is not as good as it could be…”

I was hoping to correct her personality, and put more into her schedule somehow, but I should know its effects first.

I shake my head while lamenting on my plight. Win interrupted me.

Freshly baked pancakes with butter, honey, and cream. Potage and salad, the main dish is fish, with water and a glass of orange juice right next to it. The plate have an elegant pattern drawn on it, and the tableware is polished till it’s shiny. It looks gorgeous.

I wait for Win to serve while I spread a napkin on my lap. Then it’s ready.

The dish I had last night too, was very delicious.

Many foreign meals are not suitable for Japanese people, due to sloppily boiled rice or honestly just bad food, but these food were delicious.

Speaking of which, it was a Japanese game. And as I rememberedー

“The chef was so happy he shed tears last night.”

I think for a while, chewing the white fish and remembered it.

“Did you say, ‘The dinner is delicious’ last night?”

I nodded to Win silently.

“With things like these, you can easily raise their impression of you.”

“You should keep carrying on such manners.”

Breakfast is good too.

I suddenly thought of something. That’s right.

He unconsciously straightens his back. But it’s not a big deal.

“Can you give a message to the chef again? ‘The breakfast today was also delicious. If it’s okay with you, would you make me a bento? I’d be glad to have a lot of my favorite foods packed.’”

He wonders as to why I wanted a bento, but still nodded.

One beat later, he finally realized my intention.

A mischievous smile appears on Win’s face, as if he had been intrigued.

He bowed once again.

I wanted to use this to rebuke her, so I wanted to leave as soon as possible.

I go to school by car, driven by Win.

I felt like the number of cars on the road are not as many as there were nowadays, and it’s a luxury car, belonging of the upper class.

“Is this Fiorenti nation sovereign to the King?”

“Yes, but there is a parliament under the monarch, and the constitution states, ‘The King will not deny the decision of the parliament.’ These days, it’s virtually a democratic state.”

The story being about the heroine of an Otome game, there is a semblance to England in the 19th and 20th centuries. Although, private cars were only popular after the 20th century, So, the technology of this country is more advanced.

I am a modern child who wants to read wiki, so I know.

“It has been like that for about thirty years now. Before then, His Majesty had all the power to decide everything… oh, but”

“Despite who is inside being different, the day arrives when I can talk about the laws of this country with Ojou-sama… “

“Stop wiping your tears while driving, look forward. Please, I ask of you.”

The car stopped in front of the school gate.

“We have arrived. Konomi-sama, will you be okay?”

“I have to to do it one way or another. First of all, let’s meet up with Eileen.”

Now, where could our Ojou-sama be?

I look into the school map yesterday, and marked the places where I am more likely to find her–

“You do not have to search for her.”

Win looks out the window from the driver’s seat without losing his grip on the steering wheel.

I followed his gaze, I varugely muttered, “There is a word that fits this situation well.”

And, over there is–