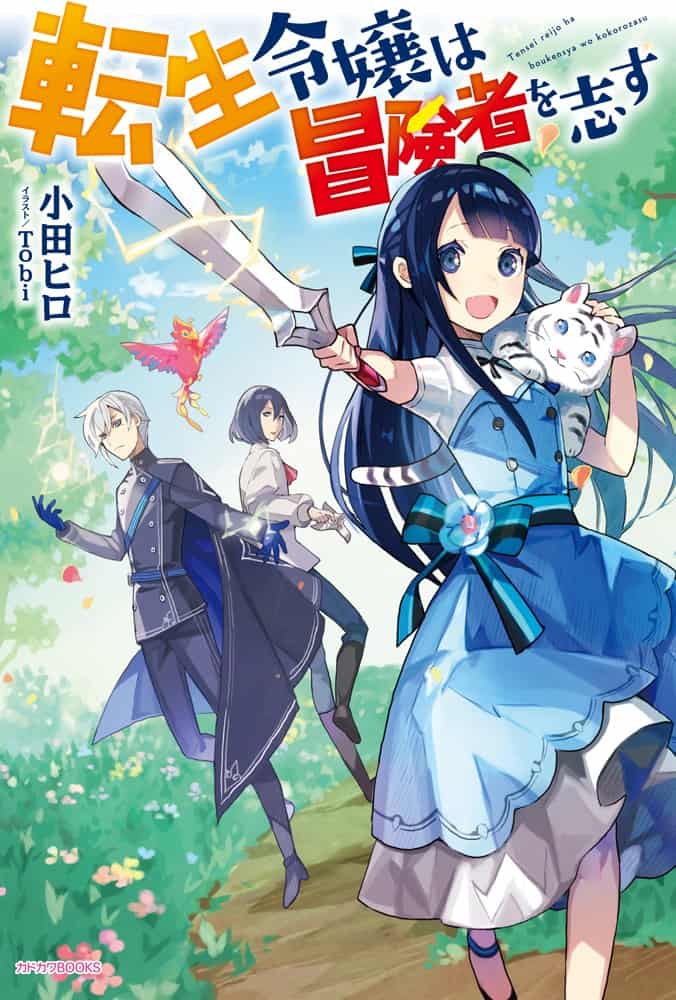 How do you do, everyone? I am Serafiona Granzeus, 11 years old.

My height is still lower than average. My Oni-Grandmother makes me run so much my weight hardly increases. Petite body with black eyes and black hair, and a hikikomori… Isn’t it possible to just live plainly in one tatami mat room in this house? Maybe I don’t have to go on an adventure?

And on the other hand, I became an Arafō when combined with my previous life. I’m concerned about my retirement and pension funds. No, no, I can’t already be seriously worried about saving cash.

Five years have passed since Older Brother’s magic tournament. As for the current situation of our family,

① Otou-sama, sexy fine wrinkles have formed on the outer corner of his eyes. Even though women of all ages have been appealing themselves for courtship, he watches Older Brother and me grow up, and our Mother’s passing seems to be waning down on him less. He uses more new magic. Although he is friendless as usual, and unfortunately, the position of the Minister of Finance cannot be returned. A ‘family first’ personnel.

② Obaa-sama, like a beautiful witch, she somehow becomes younger every year. The use of my monotone colors back then seems to have revolutionized the fashion world of the capital city. Elaborate hair ornaments are used to keep the decorum of the higher society. Not only me and Older Brother, but also Grandmother’s physical strength increases with her daily training, and the private troops in Trundle seemed to have been offered to join the national guards… A ‘Mofumofu is supreme’ personnel.

③ Onii-sama, he graduated from the Magic Academy. The heart of the country, the army, the magic council, and all sorts of top-level groups offered to recruit him, but his chosen employment is in the Royal Library. He uses his genjutsu to read the country’s <forbidden book>. He looked as if he was going to read the books at the Magic Academy. And yes, he had abstained from the magic tournament from the next year. He is a staff member who works from 9am to 5pm. It is a profession he should quit once he has read everything. He spent all his remaining time with his family. An ‘Imouto is supreme’ personnel.

④ Ludarilfina, is with the Suzaku – Ash who is <temporarily> visiting without an appointment. The ‘cake is supreme’ duo.

I discovered a little bit more about Lu. Towards the end of last year, a terrible avalanche occurred on the territory and we were not in time to prevent it with magic. The one to the rescue was Lu, who turned into an adult size in an instant and carried me on his back. He kicked the avalanche lightly, and it flew up, all the way to the top of the hill! He was always a size I can put on top of my head! I was a little moved and asked,

“Lu, is it possible that you change your physique at will?”

「Yes. But being big and bulky is too inefficient. Also, every one will give me cake if I’m small.」

In other words, he was small because walking is troublesome, and that being cute and small helps him receive treats!? The Sacred Beast is so cunning! I rode on him to visit places that are a bit far away. Very convenient for collecting materials! Oh, but, Matsuki-san is burdened everytime because cake is required in return.

And there is another cunning sacred beast.

「Ash… You’re not welcome here. My treats decrease! That guy is using your <subjection> to his advantage you know!」

「Fufufu, Ghilane can’t come here, so here I am in his stead. I will leave if you are willing to go see him.」

Ash likes ice more than cake. Is this really the Celestial Divine Beast of the South?

And Matsuki-san’s (the cook) eyes are congested with blood, inevitably due to the repertoire of ice that has to be prepared increasing. He might go bald again.

After that tournament, using a formal diplomacy route, His Majesty applied for an engagement with me. There was a big uproar. Why is the Prince of a great country going for a girl with “no magic” and ten years younger?

Considering my real ability and Lu added on top of that, I feel that he would not be giving up anytime soon.

“I don’t need any more magic. And since she has ‘no magic,’ wouldn’t it be easy for Judor to let go of her? It will be a marriage that will create friendship between the two countries.”

He said. But I am accustomed to foreign affairs in Japan. So I know how ridiculous it is to hear about friendship.

Perhaps, keeping my secret is his way of trying to earn favors with me, but since I was getting extra attention, I blew out my cheeks with a -pun- -pun- like the toddler I am! I strongly refused him with the declaration of: No visits! No dating invitations! As Grandmother said, selfishness is a woman’s spice! Yep!

Father also gave a firm refusal to the engagement. He doesn’t have any thoughts of marrying her daughter off to another country. But even if because of that, we were pushed on by both countries, the Granzeus house has no concerns about it. Our family can live anywhere. With the power the residents have, can’t we even move the resident itself?

That’s one problem dealt with! When I thought so, he sent Suzaku, who is nicknamed Ash, to <temporarily> reside here. The one in question is a sacred beast. So most of the defenses in our house have been rendered useless…… and he had now completely lived here. Just why?

「My reasons? Because the treats here are delicious?」

Just as I suspected.

At the end of the duration of His Majesty’s study abroad, Ash brought a letter that requests that we meet. He declared that it will be the last time he should be involved with me.

His Majesty was a benefactor in the previous life, and he is still sweet to me.

At midnight, the roof of my home.

“I know of Serafiona’s strength, but I’m not going to let a lady go out in the middle of the night. It’s too bothersome to get into the room and waste time dealing with your Father. Even like this, I barely have any time.”

Thus, the roof? Well, the stars are beautiful. His Majesty and I are all wrapped in black dyed clothes designed for stealthiness, while Mofumofu and Ash sat down side by side. Ash too matches his size with Lu in our house. Oh! Noble Ash! You’re too cunning and cute! Yes, it’s my defeat.

All <Contractors> can communicate with other Sacred Beasts. It is the same as being their <apostle> in this case. His Majesty goes a little bit closer to Lu and talks about something. A recruitment activity? This is his true character!

“Are you that bothered with becoming my bride?”

“Who are you calling your bride?”

“From the start, I never thought of you as a child. You’re the only one on par with me. I want you, Serafiona.”

“Don’t you already have enough power?”

“I’m not aiming for Lu. I’m sure it would be too boring to have both Ash and Lu by my side. Just as you said when you were 6 years old, I want to be your emperor. You believed in a future that even I had a hard time believing it will come true.”

I didn’t believe it. I just know.

“………seeing you being so timid is such a rare sight.”

“Hmm, I can’t lie to Serafiona. After all, it would be pointless to hear your opinions based on a lie. I truly value your thoughts, Serafiona.”

This ruler is lonely…… It is just the useless opinion of a little girl like me, but I swore to you sincerely, so you can trust me. But His Majesty Ghilane will be on an even lonelier road. A road where he can’t believe in the opinion of anyone.

“Your Majesty, do you know of the shooting star miracle?”

“If you say your wish three times before it disappears, it will come true. What does Your Majesty want?”

“Booboo! That’s no good. I would just end up struggling with being the Queen.”

“Hahaha. I have to prepare a special offer that draws the attention of Sera.”

The shooting stars fly with a bright light.

It will come true. I’m a cheat after all. What did he wish for? It doesn’t have to be a road filled with carnage.

I wonder if this will pay him back for his kindness in the previous life. I’m completely doing this for self-satisfaction. I returned my eyes to His Majesty from the sky.

The expression of His Majesty with the moon behind is dark and unreadable, but his aura is calmer than ever, and as I thought for a bit that he was cool, he hugged me lightly and removed the hood covering my head and…… kissed my forehead.

I have accepted His Majesty’s magic. Every corner of my body receives it.

His Majesty Ghilane and Ash disappears with the wind.

A few years passed, and His Majesty is now in Galle, to fight the final battle over the Emperor’s throne, a match against the First Prince.

I haven’t encountered Schneider since. However, the notion that he was ill is just a thing of the old days now. He is now recognized as the First Prince and expected to become an outstanding magician. He has good looks and is very popular with the public.

He seems to have completely stopped living a life of hiding. Is he just that confident he won’t lose if he goes against the Queen’s faction?

While finally, today, I will be writing the entrance exam to the knight school! Uwa― I’m nervous! Please help, Tenjin-sama!

AN: Last chapter, I said that Childhood is over in the postscript, but I started with a “Turning 11 years old” …which is still a child. I’m sorry to those who had been anticipated an “I’m all grown-up” development!

TN: I was super busy today and thus posted really late. You can expect new Auto Assigned Villainess in like 5 hrs? Please support me on PayPal. Thank you (~_~;)

wpDiscuz
0
0
Would love your thoughts, please comment.x
()
x
| Reply
We use cookies to ensure that we give you the best experience on our website. If you continue to use this site we will assume that you are happy with it.OkPrivacy policy